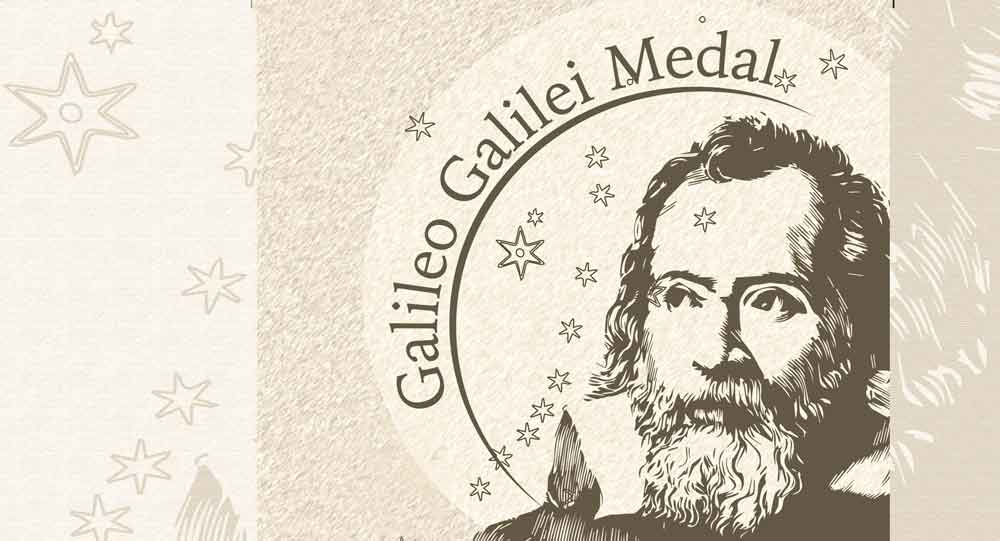 When the GGI was established as a National Centre for Advanced Studies, INFN created the "Galileo Galilei Medal" award in honour of the founding father of the scientific method and of modern physics. Starting from 2019, the Galileo Galilei Medal is assigned every two years by a special committee appointed by the INFN president with the contribution of the GGI director, the chair of the INFN committee for heoretical physics and the INFN executive board.

The medal is assigned to one or more scientists (three at the most) who, in the 25 years before the date of the award, have achieved outstanding results on the areas of theoretical physics of interest to INFN, such as fundamental interactions between elementary particles, including gravity and nuclear phenomena.

The 2019 Galileo Galilei Medal was awarded to Juan Martin Maldacena for his ground-breaking ideas in theoretical physics, and especially for the discovery of duality between gravity and ordinary quantum field theory, with far-reaching implications.

The 2021 Galileo Galilei Medal goes to Alessandra Buonanno, Thibault Damour and Frans Pretorius for the fundamental understanding of sources of gravitational radiation by complementary analytic and numerical techniques, enabling predictions that have been confirmed by gravitational wave observations and are now key tools in this new branch of astronomy.


The three physicists Alessandra Buonanno, Thibault Damour and Frans Pretorius were awarded the 2021 Galileo Galilei Medal for the theoretical studies describing the behavior of two black holes spiraling around each other until they collide, a research proved to be of great importance for the analysis of the experimental data of the gravitational waves detectors VIRGO and LIGO.

"To identify the source that generated the gravitational waves we observe on Earth, we need hundred thousand of waveform models. To achieve this goal about 20 years ago we introduced a novel approach to solve analytically the two-body problem in general relativity," explains Alessandra Buonanno. "This approach paved the way to develop the highly precise waveform models that today are routinely used by LIGO and VIRGO to detect binary systems composed of black holes and neutron stars and infer unique information about astrophysics, cosmology and gravity", Buonanno concludes.
Video interview

"In 1998 we developed a new theoretical model to describe analytically what happens when two black holes orbiting around each other get closer and closer until they merge", says Thibault Damour. "Our model predicted that this process releases an enormous amount of gravitational radiation and provided the first analytical estimate of the full gravitational wave emitted during the last orbits and the coalescence of the two black holes", Damour concludes.
Video interview

"Being able to numerically describe the behaviour of two astrophysical objects, such as black holes orbiting each other, is a very complex problem that requires long hours of computation . This problem interested me and in 2005 I came up with a first numerical solution to describe what happens when two black holes collide," adds Frans Pretorius.
Video interview

Alessandra Buonanno is the director of the "Astrophysical and Cosmological Relativity" Department at the Max Planck Institute for Gravitational Physics in Potsdam. After her studies in Pisa, she had a brilliant career in theoretical gravitational physics that has taken her to work in Paris and the United States before landing in Germany. She has received numerous awards including the Leibniz Prize, the top research award in Germany.

Thibault Damour is full professor at the Institut des Hautes Ètudes Scientifiques in Paris . Leading figure in the field of theoretical physics, he has worked on several research fields related to gravity, from black holes to cosmology to string theory and has received numerous awards during his career.

Frans Pretorius is a professor of physics at Princeton University and director of the Princeton Gravity Initiative. His main field of research is general relativity, and he has worked on a variety of topics, from gravitational collapse to black hole mergers, from cosmic singularities to black hole evaporation models.


The Galileo Galilei Medal 2019 was awarded to Juan Martin Maldacena with the following motivation: "For his ground-breaking ideas in theoretical physics, and especially for the discovery of duality between gravity and ordinary quantum field theory, with far-reaching implications." Born in Buenos Aires in 1968, Juan Martin Maldacena is one of the most influential theoretical physicists in the last decades. His ideas have opened new scenarios in string theory, field theory and quantum gravity. He is currently a member of the Institute for Advanced Study in Princeton (USA).
The members of the Selection Committee of the 2019 Galileo Galilei Medal were Sergio Ferrara, John Iliopoulos, Helen Quinn, Gabriele Veneziano (chair) and Edward Witten.


The Galileo Galilei Medal has been crafted by Picchiani&Barlacchi, the famous florentine workshop with over a century of tradition in the crafting of artistic and commemorative medals, plaques and trophies.
The history of Picchiani&Barlacchi began in 1896, when craftsman Gastone Picchiani began making medals in a small workshop in a cellar with a pantograph paid for in instalments. Picchiani's skill enabled him to open a workshop, with his brother, in the very central Via de' Fossi, where he hired three other craftsmen.
In 1921, the firm became Picchiani&Barlacchi. Bruno Barlacchi was a bookkeeper who had begun keeping Picchiani's accounts in 1915. He had a passion for medals and his instinct told him that they had immense potential in the world of sport. In 1950, Picchiani left his business to Barlacchi, and the workshop moved to his current premises in via Petrarca.
The products are crafted using traditional methods, beginning with the drawing, then the creation of a plaster model, the casting of the model, the reduction using the pantograph, the production of the die and finally the minting. Numerous famous sculptors have worked on the creation of the moulds for the products of Picchiani&Barlacchi.
In addition to the old pantographs, which are still used today, and other machines necessary for the production of the medals and plaques, the premises host an extensive archive of minting dies, which would allow the reconstruction of the history of Italy and the world from the beginning of the 20th century to the present day.